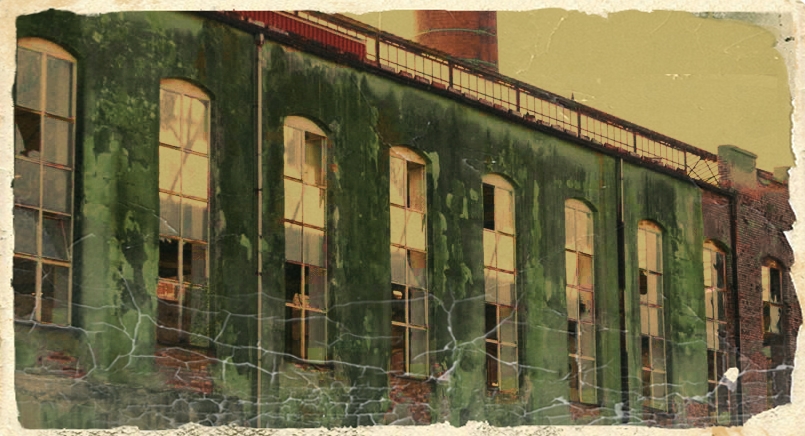 “Goddamnit’s hot!” reverberated through the alleyway. It was hot, over 90 degrees – if the thermometer he toted around in his old Woodman’s Market shopping cart could be trusted. He trusted so little these days. The red brick buildings stood around him, silent and sturdy. Unlike most of the city, they would last for decades under the harsh sun and harsher winters. Their scurrying furry inhabitants chewing up insulation and wires. Happy.

Was he happy? He didn’t know. He could hazily remember the days before the fall. He did remember clearly the Woodman’s from when he was a kid…all the food you could ever want in one huge building stuffed to the rafters with it. Mom and dad would set him the cart and he would make engine noises, a motor of spit and giggles powering through aisles of canned goods and rows of fresh fruit and vegetables. His mouth began to water.

He bent over a huge growth of brambles which had erupted from the broken asphalt. It was full of luscious ripe blackberries; he began to pick with care, avoiding the sharp thorns (and possible infections). He remembered the nasty cut he got climbing over the barbwire that was around the National Guard campus; the last of his hydrogen peroxide used to wash away the blood and rust, but not the pain. His fingertips were turning deep purple from the berry juice. Using too much pressure.

Too much pressure. That was the quality answer to the Big Question. Too many people. Too many proud and unapologetic politicians. Too much pressure. He had been walking past the capitol building in Madison when the Civil Defense sirens began to wail. His blood ran cold, rooted to the spot as car radios began to screech with Emergency Alerts. That wailing was more terrifying than the results of the wailing. Chicago was gone in an instant. Toronto too. Flash fires and fallout. And so much for ‘nuclear winter.’

Satiated by blackberries, the welcoming shade of the warehouse he stood next to invited him in. The roll up delivery doors hung frozen in place, open portals to cool napping. Climbing up and looking around, he realized that he found a veritable palace. Mattresses. Soft and plastic-wrapped. Clean. Waiting for his tired head.

The world had changed. The Midwest was mostly abandoned. He moved in when others left, the silence and the echoes preferable to the crowded undamaged corners of America. Here he could scrape by, watch the clouds move across the great band of the Milky Way at night. Whistle at the stray cats, read for hours on end. So he coughs now at all hours, sometimes bringing up a little blood. The radiation will kill him someday. But why worry? At least it would be on his own terms.

He picks a memory foam model – lies down, allows “goddamn this is comfy,” to come from his lips, and he sleeps.