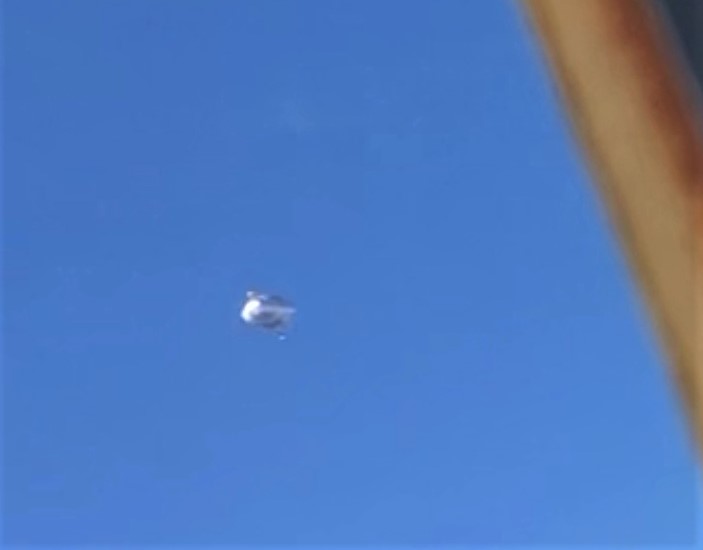 It was after 9:00 pm, almost 15 years ago. I was walking my dog Chloe along a narrow two lane road near Lake Arrowhead in the San Bernardino Mountains. There were no street lights, and it was a very clear moonless night. I would stare up into the sky while she did her business and try to find the constellations or identify Mars or Jupiter. Doing basic naked eye astronomy, my dark adapted eyes caught a vague greenish light in the sky, it was moving slowly at first and then began to speed up, leaving bright green curlicues in its wake. I watched it until it disappeared.

I remember running back to the house to tell my wife about what I saw. I frantically wrote down my observations and posted them onto a local neighborhood website – asking if others had seen what I had seen. All the replies were rude, making fun with pejorative “UFO” nonsense or implying I was drunk or high. I looked to see if there were any rockets launched from Vandenberg, a typical Southern California cause of unusual aerial phenomena (rocket exhaust clouds in the high atmosphere) but there were no listed launches. This was a classic example of an ‘unidentified aerial phenomenon’. I had no resources to help me identify what I witnessed and now I only have the memory to rely on.

I relate this personal experience to the recently published official Government Report: “Preliminary Assessment: Unidentified Aerial Phenomena” that briefly examines and discusses the new-found interest the US Government has in Unidentified Aerial Phenomena (UAP). From Previous reports published in the past, such as Projects Sign, Grudge, and Blue Book, the official line on UAPs (formerly UFOs) was that there was no there there. Rationally, I agree with most of their findings. Too many people are unfamiliar with the night sky, with unusual atmospheric effects, ambient emission of radiation, or even high-flying birds, aircraft, and satellites that can explain the vast majority of UFO sightings.

What the most recent report does seem to indicate is that there are things that exist that none of the usual suspects can explain – namely from eyewitness accounts backed up by extremely sophisticated sensors that show objects that evidently defy our understanding of physics within Earth’s gravity well. While most people are concerned about the idea of ‘aliens’ that seem to be targeting US military bases, I think the most terrifying possibility is that a foreign adversary may have figured out a way to defeat inertia and negate mass to create extremely maneuverable drones. This would be as if the French Air Force of 1914 had to fly biplanes with their pilots armed with handguns against F-35 Lightning IIs.

The report lacks detailed descriptions of the types of encounters that were reviewed during collation, however several events have been “leaked” to the public, including multiple videos of high-speed objects performing unusual aerial maneuvers. One such video shows a spherical object recorded in infrared flying a steady course before lowering itself into the ocean and suddenly disappearing. Observers in the Navy have reported objects flying directly out of the ocean at high speed and banking away from them. One report described by a pilot included at large black triangle with three lights at each corner flying at vertical over their cockpit, the triangle having come up from out of the sea.

Some of these reports may be weather balloons, or advanced spy drones. But the potential for them to be only those things is low. If a nation other than the United States has developed vehicles that can defy gravity, inertia, and be impermeable to high-velocity impact to or egress from the ocean, then we are dealing with an adversary that can theoretically violate our airspace and nullify our nuclear deterrents – both via intercontinental ballistic missiles and second-strike capable nuclear submarines. Many questions regarding US policy come into play – including former President Trump’s insistence on creating a Space Force as an independent branch of the military, tasked with “provid(ing) freedom of operation for the United States in, from, and to space” and “provide prompt and sustained space operations,” and to “protect the interests of the United States in space, deter aggression in, from, and to space, and conduct space operations.” Along with this focus, our foreign engagements in the Middle East are rapidly coming to a close and our attention will be refocused on the Pacific. The rise of China, especially as a space power, will be one component of the Space Force’s mission. But I feel that UAP may also be high on the agenda.

However, if we eliminate the extraterrestrial/space origin hypothesis then the remaining option (beyond unknown environmental systems i.e. ball lightning, plasma discharges, high-altitude charged-particle emissions), we can assume that human factors are involved in these sightings. The question of understanding how humans can be behind these objects involves understanding potential technological signatures, exploring concepts ‘written’ off by the scientific community – such as anti-gravity propulsion, compact fusion generators, and inertia negation; or alternately, these objects can simply be unconventional drones using standard systems in innovative configurations.

The United States government is not one to readily share classified information. Most of these videos and reports of UAP potentially reveal sensor capabilities and information gathering systems to our adversaries. Industrial espionage and intelligence may be impossible if what we see is non-replicable technology, thus explaining our rationale for revealing them to the general public. There are many things that this portends, and our vigilance should be kept at “eyes wide open” if we really want to know what is flying through our airspace unbidden and unasked for.