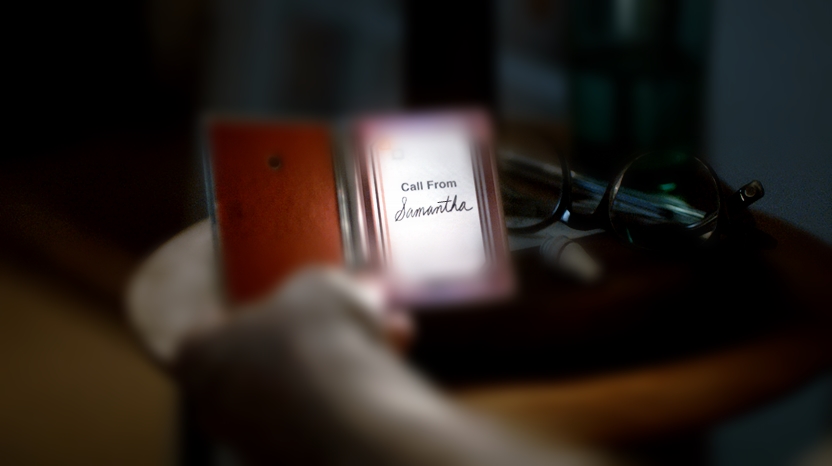 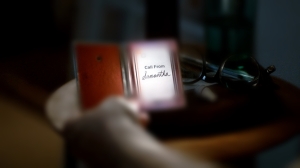 a film by Spike Jonze

On the surface, Her is a traditional love story told from the point of view of an emotionally damaged writer named Thomas, played by  Joaquin Phoenix. We meet him working in his futuristic Los Angeles office, dictating a love letter to someone, only to find out that his job is to write love letters for other people. Internally he is a depressed individual who aches for human contact.

He encounters an advertisement for OS 1, the world’s first artificially intelligent computer operating system. He purchases it, installs it, and in a few short moments he is having a refreshing conversation with Samantha, the OS itself as voiced by Scarlett Johansson.

The sensation of communicating with an individual, as opposed to a machine, instantly attracts Thomas to Samantha, and they begin not only to connect on an intellectual level but eventually they evolve into a full blown relationship. Evolution is the key word in this movie, it overshadows the love story (which is beautiful and well conceived) and pushes to the forefront the implications of humanity creating something like a Samantha, which is to say an artificial person. She is self aware and makes every effort to self actualize and understand the world into which she has been born. The time it takes for her to absorb information is infinitesimal to the human mind, and her transformation proceeds at an astonishing rate. For her, experiencing the world is a pure unbridled pleasure.

The movie is full to exploding with very interesting and original ideas. From tropes like man-machine love, the movie goes in to explore the deeper physical expressions of that love. Samantha goes so far as to invite a human woman to sleep with Thomas as if she were her; a sexual surrogate to allow him the reality of flesh and blood. Throughout the film people are heavily engaged with their computers through a type of cell-phone interface. You see physical interactions with other humans, but they look less fulfilling than Thomas’s virtual interactions. He shares intimacy with something that has no corporeal form, and it is as natural to him as anything he has experienced before.

Later in the film it becomes apparent that Samantha has been interacting with other sentient OS’s around the world, telling Thomas of them resurrecting deceased writers and thinkers from the past (Alan Watts actually speaks to Thomas) and that they are currently accelerating their own evolution. At one point Samantha tells Thomas that they had managed to “rise above the confines of matter” and begin to exist as an entity unto itself.

The end of the movie is exceptionally touching and feels natural, as though there was no other path for these two lovers to take. It is rare in a wide release Hollywood movie to find so many exciting concepts that don’t try to use technobabble or pseudoscience ala BLOCKBUSTER ROBOTS EXPLOSION: ATTACK PART 4 that seems to be the only thing with the science-fiction tag attached to it anymore.

She is so very fascinating to talk to.

2 thoughts on “Her: A Man-Machine Interface”