My wife and I visited with this little creature when she came to Seattle in 2009. Our kinship extends across time and space, where the exploding supernovas of billions of years ago provided the raw materials to allow our creation. Evolution gives us insight into what we are and how we came to be. It is truth. 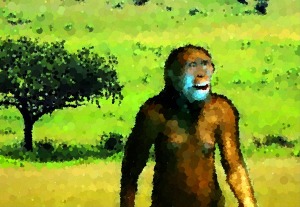 The lights were low

the walls full of displays of little furry bipeds

from pieces of flaky shale.

After the noise and clamor of the walk up,

this tomb, this royal burial chamber

of space age plastic and microclimates,

was in fact a silent shrine.

All of this put into place to allow us a

look at the remains of an ancestor so far

removed that only guesses could be made

about her lifestyle, diet, hair color, what

she thought about and how she died.

She was laid out on a black table

each rib and vertebrae a granite-gray and tan.

veneration in a dark temple.

We circled around her case, looking at each chunk

of fossilized tibia and beheld evidence of knees built

for walking erect. You could hear in this evidence

her delicate footfalls under a deep blue moon one

I felt the vibrations of memory as I stood there, sensed

echoes ringing off of canyon walls somewhere in

scientists chatter and congratulate each other

on finding her. Over their celebrations a radio sings

“Lucy in the sky with diamonds…”

and the stars above the camp bear witness.