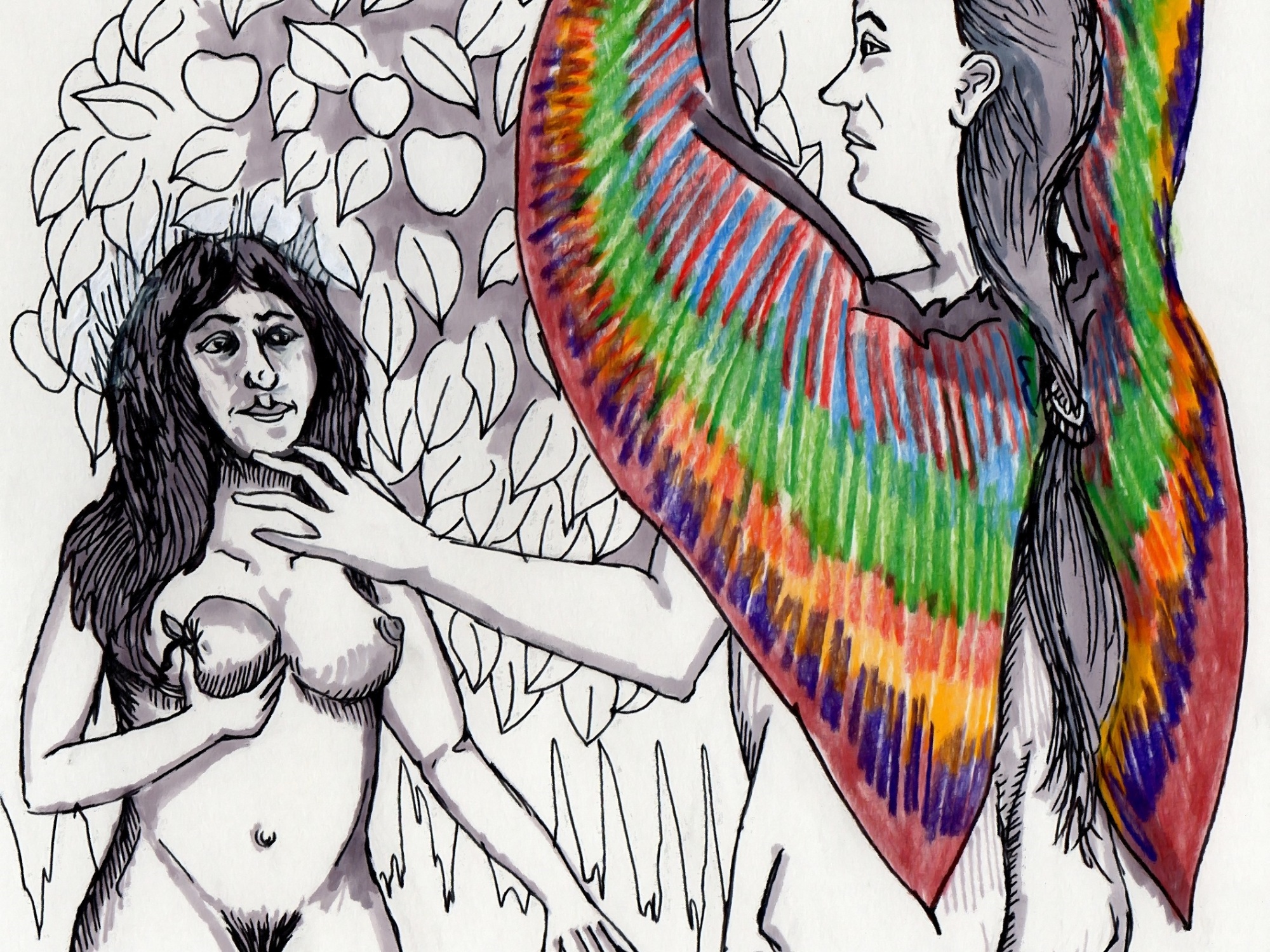 Eve looked slightly suspicious, “You’re telling me that eating something as simple as this fruit would give me, and by extension, all of my decedents-the knowledge of good and evil; notions which at this point I certainly have no conception of?”

Lucifer looked her over from the crown of her wavy brown hair, looked into those hazel eyes, grinned slightly at the soft pink mouth, blinked twice at those breasts (definitely one of God’s best pieces), followed along her thighs; her secret spot between that Adam alone had found, and said, “yes.”

She wanted nothing more than to know. She annoyed poor Adam with her constant questions, like how did they get there? How did they even have language or names or the knowledge of Eden, this nature preserve of a Garden? He would wander off into the woods and give names to all the animals just to please her. Then, all of a sudden, this beautiful other walks into the garden and strikes up a conversation, acting as though she was accustomed to seeing strange men in town.

He was like Adam, so pretty, so clean and tall. His rainbow wings glittered in the sunlight, and his blond halo of hair streamed back from his forehead. He introduced himself as “another lowly serpent created by God Almighty.” His hands were strong and he touched her face ever so slightly in greeting.

“I wanted to come and visit this little world of our Father’s, to see these beloved creations of which we have all heard so much about.” His voice was honey in Eve’s ears, each consonant pronounced with finesse and enchanting with charm.

“You my dear are a woman, a human woman,” he went on, “and I am an archangel from somewhere up in the firmament, probably a step or two beyond the Horsehead Nebula.” She gazed at him, not fully understanding his references, but thrilled at being addressed to nonetheless. “My name is Eve, wife of Adam, child of God,” her innocence strikingly clear-her desire to be friendly to this stranger overwhelming. “May I introduce you to him?” The ‘serpent’ laughed a small laugh and shook his head, “my dear, you are the only creature I wish to discourse with today.”

“Tell me all about what life is like in your Garden, tell of the trials and tribulations of the only two of your kind,” He seemed to purr in Eve’s ears, though he stood a chaste distance away.

“There are no trials here sir, only our happiness…all of our wants are taken care of. Adam goes about and brings us fruits and nuts and vegetables to eat, he names the animals that frolic around us and teaches me their names, sometimes…”

“Go on,” prompted the serpent.

“Sometimes, Adam and I lay under the stars at night and talk about what is out there, out there beyond the Garden walls. You wouldn’t happen to know, would you?”

His lips curled slightly in curiosity, “Have you not ventured there yourselves? What is stopping you from seeing this absolutely enormous world made entirely for you?”

Eve looked down at her feet, reflecting her consternation, “There are gates guarded by giant beings clutching flaming swords, it seems they are there to discourage our venturing.” She was quick to say however that it did not reflect badly on God and his intentions for then. “Adam and I used to assume they protected us from what is out there, as opposed to preventing us from leaving…but Adam has his doubts.”

“My dear, you do looked troubled, certainly there is nothing in all of the Father’s creation that could harm anyone. Even the beasts play at peace.” He bent down and began to sit on the grass, crossing his legs and stretching out his hands, “would you like to know my name?”

Eve followed suit, laying down across from him, propping up her head in her hands. “Of course I would like to know your name, otherwise how could we become friends?” She said this with a delightful giggle.

“My name dearest woman, is Lucifer. By any chance has God mentioned me to you?”

Lucifer looked at Eve and shook his head with a deep sigh, “Eve, lovely thing you are, understand that God is not really terribly interested in conversing with his creations, you see we are incredibly inferior to something as overwhelmingly powerful as He.”

Eve asked, “is God your father as he is our Father?”

It was Lucifer’s turn to giggle a bit and said with resolution, “yes, by far he is my father. In fact, you could say that I am an older cousin of yours- about three trillion times removed. A long time ago I had a bit of a falling out with the old man; he kicked me and a few of my brothers out of the house so to speak. It’s been a long couple of millennia I’m afraid.”

He looked so sad, Eve thought. He took a deep breath and continued, “You see, when you get to a certain age you begin to have some ideas that are slightly different than what you were brought up with. Naturally, you bring up these ideas and make an attempt to ‘break out of the mold’, you know, define your own existence and such.”

Eve looked confused, “Our existence is to honor and worship our Father, to keep him pleased, to reward him for creating us.”

Lucifer laughed heartily, “Dearest Eve, most beloved woman, why should you do that? Why are you beholden to give constant thanks, endless praise, and utter obedience to your Father? Surely he can survive without your fawning for a bit. Surely he is powerful enough to not need you on your knees all hours of the day?”

Eve remained silent, unsure if Lucifer was being unkind to God, or just attempting to get her to ‘think outside the box’ as he said before.

He continued, “You are born to this world, a world infinite and unbounded compared to this tiny little Garden. Imagine if you can have the same level of understanding that your Father possesses, imagine being able to discern meaning in the multitudes of molecules that make up matter. Imagine being able to see into the realm of the stars, imagine being able to visit not just this beautiful earth, but to travel to worlds far away and unimagined in your most fevered dreams.”

Lucifer began to stand up, Eve following suit, astounded by his energy, “Imagine communicating across vast distances with nothing between you and Adam or your descendants, but the very air! These are things God and the angels and the archangels can do. I was most favored, I was his most beautiful creation, that is before you dear Eve.” She smiled coquettishly, “All about you is evidence that there is more to life than what your Father is telling you. Have you heard about the ‘Tree of Knowledge’ that exists in this Garden?”

She nodded agreement, “Yes, but we have been warned of the dangers of that tree, so Adam and I avoid it always.”

Lucifer grinned hugely and beckoned her closer to him. “Have you ever flown my dear?” and with that, he lifted her off of her feet and took to the air on his mighty and glamorous wings.

After the briefest of flights, he alighted her in front of the tree itself. Eve looked frightened and told him, “surely we shouldn’t be here, the Father would not be happy to see me!” Lucifer said under his breath about the watchfulness of the Lord, and pointed at a gleaming red-skinned fruit dangling from a low, nearby branch.

“Eve, the sweet and innocent,” have you never in your heart of your hearts had doubts? Have you not once thought about the absurdity of your condition, of the cruelty of your continued ignorance? I am showing you that this fruit is a gift, not a threat.”

She stared at the beautiful, lithe body of Lucifer, she looked over him, from his crown of long, blonde hair, his proud and high nose, his golden skin, his long torso and the brilliantly colored wings jutting out from his shoulders, she glanced at his penis and felt that tingle, already familiar from the past nights in the sweetness of Adam’s arms.

She looked into his eyes and asked plainly, “what beyond knowledge would this fruit grant me? What beyond punishment would I gain from eating what is forbidden to me and mine?”

Lucifer shrugged his shoulders and said, “You will be as free as me.” With that he walked to the tree and plucked the fruit with one hand and turned to Eve, “take a bite.” She opened her mouth and wrapped her lips on it and bit down.

The juice running from her mouth tasted like freedom. Lucifer wrapped his lips on hers and tasted it too.

From the bushes behind them walked out Adam, asking, “What is this?”

“The beginning of creation,” was all she said.