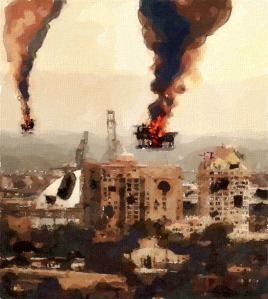 I remember Venice and the stucco

homes along the canals.

I remember coastlines of soft sand

and people arrayed along them as

far as could be seen;

a warm summer day was a beach day.

The weather could be comfortable

even in August, and when I was a child water,

drinking water, flowed freely over the

Even on smoggy days when we would

have to be inside during recess, the

wide open California feeling was there.

I remember chilly days in November

when the sea fog was almost sharp-

prickling your face as you breathed out

cumulous clouds in a Sunday morning.

A rare patch of black ice on a shady sidewalk

was the worst of the winter.

In time it all changed and the seas

grew larger as they were fed with angry

storms in lands I have never seen.

The skies above California dried up

and the smell of rain was nothing

more than a memory of gray days.

and desert winds blew out from the East.

A trillion short tons of particulate

and a solar panel nailed to a

I imagine that golden sunshine

could’ve been a boon to a state so full

of life as that one was. How easy it

should have been to save it.

From the ruins of Long Beach you

can watch the burning oil platforms

and smell the red blooms of algae.

The last sea lion died up at Cabrillo.

Twenty years ago, some of us managed

to make it to Mars for a new start.