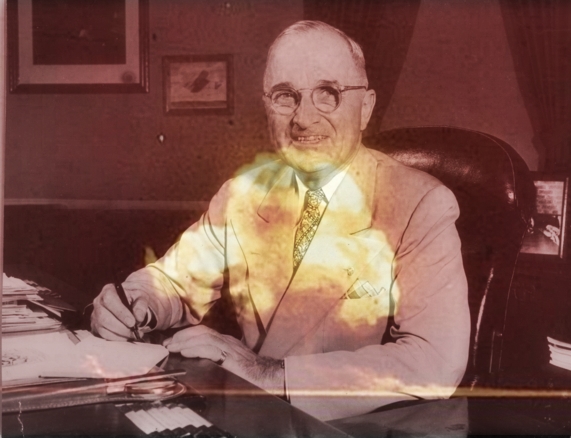 Truman sat and stared out of an Oval Office window

the rose garden was bare

and the old President dead.

Here before him was a weapon to cease all war

He was shown the footage

a mushroom cloud rising from the desert floor

briefly a new sun in the dark of early morning

Overwhelming was his desire,

desire to attain this fire.

To give the order and have this crown

placed atop his head

a crown of atoms

The power to end the Japanese

and bring the war to its knees.

He said when he became President that “the moon, the stars, and all the planets had fallen upon him”

But the Bomb was no big decision.

“I knew what I was doing when I stopped the war that would have killed a half a million youngsters on both sides if those bombs had not been dropped. I have no regrets and, under the same circumstances, I would do it again.”