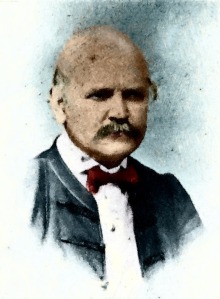 There was a kick into your ribs

and the crack of those bones

was an echo from memory,

you spit up your vivid red blood

the learned and the wise

who challenged your discovery

Your sickness is default

stress from every ‘trusted’

practitioner, honest to a fault,

who felt you were a liar

and refused your advice. The

mothers though are the ones

to suffer, they die in droves.

With fevered heat and aches and

and poor who would have rather

given birth in the horse shit

and flies covering the streets

of Vienna, then to die in the

safety of the clinic.

On their knees begging to avoid

the Doctors covered in the stench

of cadavers, to see a midwife instead

Why are you so rational, so willing

to find out the cause of death? Everyone

are the cause of disease…not invisible

particles under our disgusting finger nails.

We’re gentlemen through and through, not

But you know, deep inside from the work

you have done, that bleach and water

can stop the spread of death to these

poor beings. You can show in detailed

charts that the deaths have dropped

to almost nothing! Clean hands and tools

prevent the danger…it’s so simple a fool

could make the connection. Except for

all of the fools of Europe, the smart

gentleman who know all.

They don’t believe what they can plainly see.

You do what you can, you call them out

as murderers and charlatans in open

letters and pamphlets and public talks.

You just want to stop the death.

But they lock you up as a mental patient

and beat you so bad

that you die two weeks later.

In the moments before you cease to be,

you feel, momentarily, a sense of worth.

But it passes and what remains is senselessness.

you want those girls to live.