The city of Long Beach, California is currently in the midst of pouring over proposals to replace it’s vintage 1970s era Civic Center with a newer, larger, more environmentally friendly structure.

Long Beach has a rich history of city halls, starting from its first building constructed during the last decade of the 19th century. It was a smallish amalgam of Romanesque and local crafts-work.  It contained city offices and the town library and was situated near Lincoln Park, the largest such public space in downtown.

After the city’s enormous population boom during the 1910s on, this building was not able to support the growth of offices needed, leading to the construction of a second building, built during the 1920s. It too was Romanesque with Italianate detailing and was considerably larger. 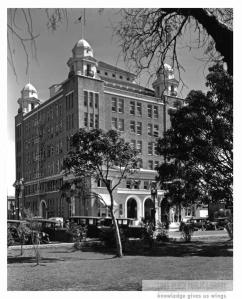 This building served the city well until the Long Beach Earthquake of 1933, where it suffered major structural damag, resulting in it being reinforced as well as receiving an exterior makeover matching the WPA Moderne styling of the times.

Of course the need for additional space didn’t slacken over the next several decades, with multiple smaller buildings being constructed to house certain departments and by leasing offices in surrounding buildings. By the early 1970s the city was determined to construct a new building where scattered departments could be incorporated into one place. Prior to the building the new tower, the city’s Main Library suffered a major fire, forcing a new main branch to be included in the master plan. 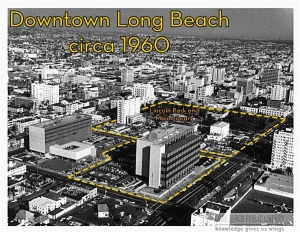 The new library was huge and was designed to be sub-level and covered with green spaces, basically extending Lincoln Park. It was a radical departure for most civic architecture at the time. The new, massive city hall tower reflected the scope of the city’s dreams in relation to being a major player in not only California but also it’s global ambitions. 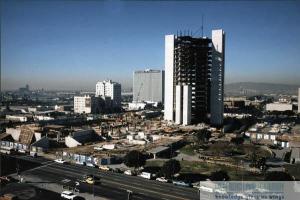 The years have not been kind to the existing civic center. The tower is in danger of structural failure in case of a major earthquake and the main library has had it’s green cover removed due to severe leakage from decaying concrete, damaging the collections.

On top of the major structural integrity issues, the civic center is an atrociously ugly collection of brutalist architecture; oppressive and lacking color and beauty.

Knowing how I much I love the city, I felt that it would be an excellent opportunity for me to create my own dream master-plan for the 15 acre area that needs to be redeveloped.

This is my vision:

I would demolish the existing tower and library and replace the park with a larger greenspace with water feature. The library is more functional, with above ground access and a roof covered in energy generating solar panels. The city hall is spread among three matched towers with smaller footprints than the original building.

The Port of Long Beach gets it’s own major tower, designed to reflect the flowing curves of the Pacific ocean swells. Additional floor space can be rented out to other companies. I would incorporate a large above ground parking garage as well as an underground space under the city hall complex.

I have included a space for the Long Beach Historical Society to display it’s collection as well as a large gallery space for traveling exhibitions and a ‘panorama’ of the city similar to the one in at the Queens Museum of Art in New York. https://thenuminouscosmos.com/2014/01/01/lb-civic-center-historical-society-building/