My wife and I recently had the pleasure of visiting the second city to Seattle, Tacoma. All of the years we have lived in the Pacific Northwest and we had never been!

My impressions of the city were extremely positive. Every person we came into contact with was extremely nice, from helpful locals with directions, suggestions on places to eat, and the positive attitudes of thousands of concert goers, I was very pleased. There were so many similarities to Long Beach, California, that I sometimes thought I was back down south, which is high praise believe me.

We started out with a tour of the wonderfully compact Point Defiance Zoo and Aquarium:

The zoo is on Point Defiance jutting out into the Puget Sound. The zoo is luxuriously landscaped with hundreds of different plant and tree specimens from around the world. The light and color on this bright summer day was intoxicating.

This is the first time I had ever seen an elephant up close. These are Asian elephants, male and female from what I understood. It was early in the morning and I think they were having their indoor area cleaned, so they stood in the open space in the sun. This one was using his amazing prehensile trunk to throw dirt on his back and sneak grass from a roped off area. 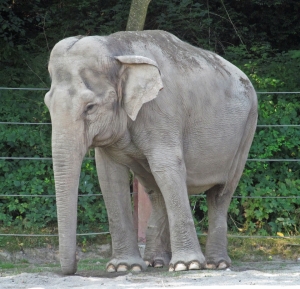 This one stood in the shade pretty much ignoring every one. 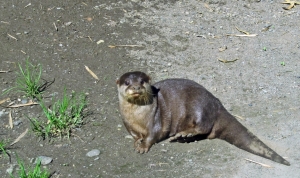 The Asian otters we met were extremely cute, a male and female mating pair. They were very rambunctious and seemed to enjoy the crowds of people watching them.

Only one of the tigers was out that morning, the zoo docent said that this one was pregnant-she was spraying all over everything in her pen! What a beautiful and highly endangered creature.

We met some Gibbons hanging around as well, with their thoughtful, intelligent faces speaking to us and our obvious evolutionary kinship: 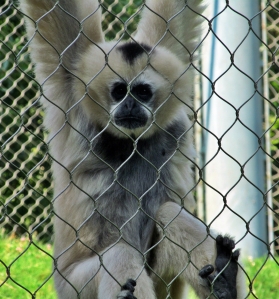 We stopped next in the aquarium area where the display was involving sharks – no doubt to cash in on “Shark Week” frenzy (this is a megalodon jaw surrounding a homo sapiens) : 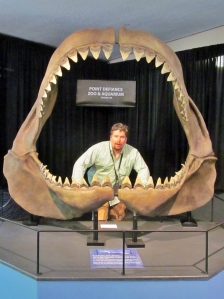 The universally beloved penguins were here, but this particular species is one suited to environments similar to the climate of the Pacific Northwest.

My wife’s favorite animal, the sea otter, was well represented here. They were lazing around in the sun and playing with plastic toys. 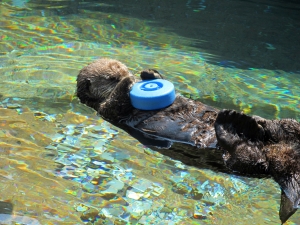 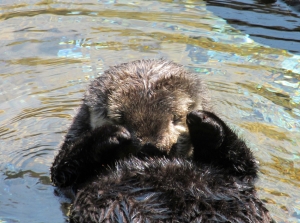 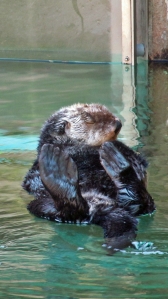 We came face to face with a walrus:

The meerkats were extremely cute. Very active critters with inquisitive natures. They had a large outdoor space and an equally large indoor den area that was very impressive: 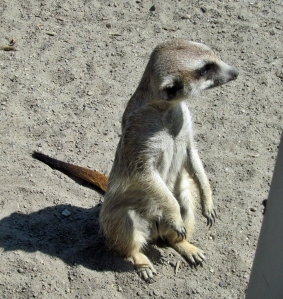 These marvelous animals are the red wolves. Saved from certain extinction by the zoo starting in the late 1960s, the population rebounded from less than 20 to several hundred returned to the wild. Amazingly beautiful faces: 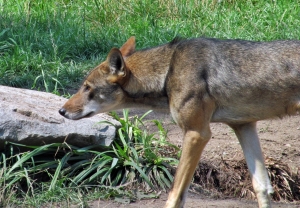 After the zoo we went to Tacoma city proper in order to see a concert at the large Tacoma Dome arena. The city is beautifully arrayed on its sloping hills, with green sea below and blue sky above. I was enchanted by the skyline:

The Tacoma Dome itself was unattractive, but impressive by strength of its sheer enormity:

The city is a mix of 19th century industrial architecture and modern, with several examples from the turn of the last century impressively well preserved, such as Union Station:

The campus of the University of Washington, Tacoma is in the downtown core, using adapted warehouses and old office buildings: 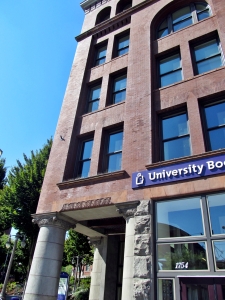 Again some more of the Tacoma skyline:

Lastly, my attempt at a panorama using my iPhone: