My wife and I recently had the privilege to visit the only “open to the public” Frank Lloyd Wright house in the Pacific Northwest. The home, known after its original owners as the Gordon House, is located at 869 West Main Street in Silverton, Oregon. The house is located in a public garden where it was removed to in 2001. The home was originally sited along the Willamette River in Wilsonville, however, the family sold it in 2000 to people who wanted to demolish the home (as seems  to be the case with most Wright’s homes- ostensibly to build some Mcmansion monstrosity).

The Frank Lloyd Wright conservancy arraigned to buy the house for a dollar as long as they took it off of the property. It was dismantled and reconstructed as close to the original specifications as possible.

The home itself was designed by Wright in 1957, built in 1963, and is based on a rather large 7×7 foot grid. The structure is strongly associated with his later Usonian layouts, however the basic format was introduced by Wright in the 1930s. The home does contain a gorgeous Cherokee Red concrete floor with radiant heating and a large fireplace hearth.

The floorplan is technically an open one, with the living and dining spaces combined, and the kitchen (or as Wright called it, workroom) accessible through a doorless opening from the dining area.

The kitchen is particularly interesting in that though it is relatively small, it contains a fantastic 15 foot high airspace covered with a skylight.  The built-in appliances and Subzero refrigerator, along with a retractable electric cookstove, show how far in the future Wright’s visions were.

The living room boasts several wooden fretwork features that Wright utilized as a low-cost alternative to stained glass. By the fireplace is a nook setup as a music listening area with built in shelving, hidden phonograph, and large cabinets under the red seat cushions. The lower level includes the master bedroom, an office, and two bathrooms.

The upper level includes two additional bedrooms, a large bathroom, and an intriguing space for Mrs. Gordon’s weaving loom. The ceilings are about 6 feet on the upper story, which is surprisingly comfortable, giving a genuine sense of shelter despite what might be considered claustrophobic to a taller person. Each upstairs bedroom has a small porch they extends out like a wing on either end, allowing you to interact with the trees outside.

Outside the home is a interesting series of viewing angles. The large windows in the living room are sheltered by cedar overhangs, pierced through with square openings. The opposite side of the home is varied in stages and has a circular, low lying wall that extends out as a balancing feature for the composition.

There are multiple entrances to the home, the primary point being the door closest to the car port.

I was very impressed with the quality of the restoration and even more impressed with the overall feeling of the building. This is the first Wright designed structure that I have been able to see in person, despite my years of interest in his work. I came away from the experience with a renewed sense of wonder, entranced by the power of Organic architecture. It is human, it is beautiful, and it is American.

It was an exceptionally beautiful late summer’s day when we arrived: 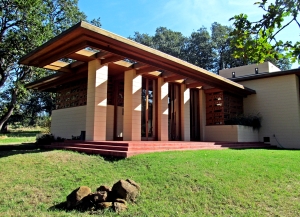 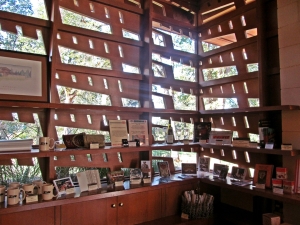 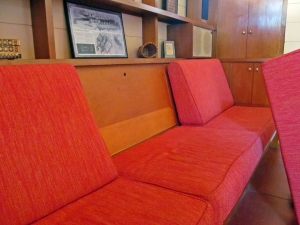 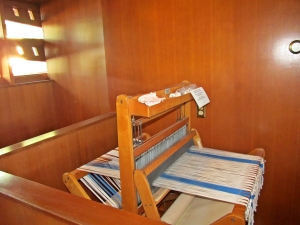 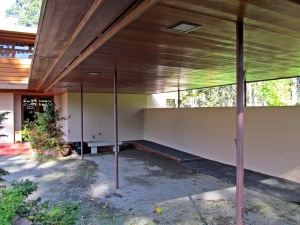 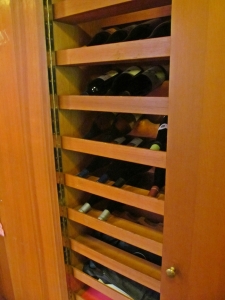 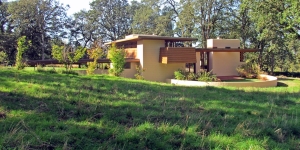 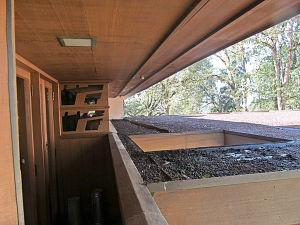 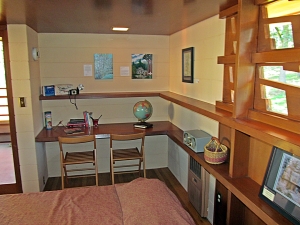 Please visit this magnificent home if you are able! http://www.thegordonhouse.org/

One thought on “Gordon House”